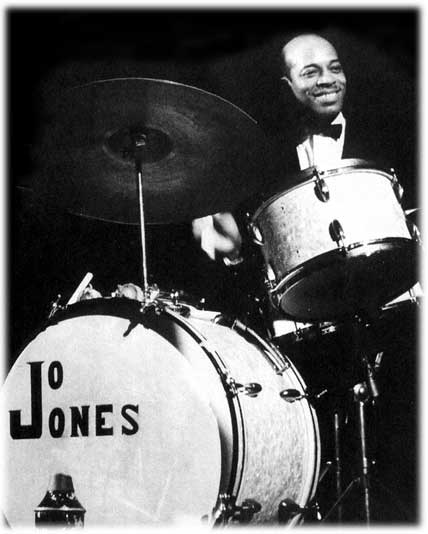 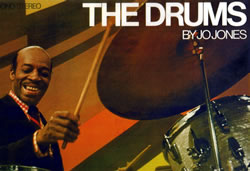 I was lucky enough to get a copy of the 1973 book and CD by Papa Jo Jones called The Drums. Jo Jones influenced swing and bop drummers by shifting the timekeeping role of the drums from the bass drum to the hi-hat cymbal. In 1934, he joined Count Basie's band, influencing the Great Buddy Rich and the Great Louie Bellson. He recorded in the 1950s with Billie Holiday, Teddy Wilson, Lester Young, Art Tatum, Duke Ellington and more.


The Drums by Jo Jones

On this recording, Jo Jones speaks about many drummers he knew:

1) Mr. Manzie Campbell. Jo says that Manzie played with The Silas Green Show and was without a doubt THE world's greatest drummer.

3) Josh. A Kansas City drummer that only played the snare drum who used to swing at any jam session he had with Hot Lips Page, Herschel Evans, Lester Young, Walter Page, Basie, Pete Johnson, etc. He could really swing!

4) Unnamed Drummer. A St. Louis drummer who could swing the band.

5) Alvin Burroughs and A.G. Godley. Alvin was a tom-tom and cymbal man. He would take a quarter between his thumb and forefinger, and put his hand under the cymbal! He had an uncanny way of doing this! This was the origin of the sizzle cymbal! That was his trick and everyone tried to get that sound.

Alvin asked Jo Jones if he ever hoboed. "What's that got to do with drumming?", Joe said. He said, "You got to learn the train." Joe said, "What is the train?"

A.G. Godley took the time to show Joe the train. In those days of the steam engine, the train would say: I think I can - I think I can - I think I can, etc, etc. Joe demonstrates how A.G. Godley would play it, accenting according to the situation and arrangement -- and the whole house would be rocking! And they used to get off: He was the first drummer Joe saw in his life that everybody would get off the band stand for 15 minutes in a theatre or dance hall -- and he'd be up on the drums and that's all he'd be playing!!

6) Gene Krupa. Jo said he played one simple beat and demonstrates it. He said we try to play simplified things, so that's a thing you would identify with the various drummers he mentioned.

7) Big Sid Catlett. Joe said he couldnt play what Sid did with mallets, because he (Joe) holds that mallets in a very orthodox manner.

8) Unnamed and Unplaced Drummer. Joe said this unnamed drummer played nothing but straight time and that you could depend on him. He could swing a band into bad health!

9) Walter Johnson. Referring to him as Mr. Drums and the Guy Lombardo of the drums, he said Walter baffled him as he used one wire brush and a stick in one hand with certain ensembles in Fletcher Henderson's band.

10) Sonny Greer. The only drum stylist was a youngster that's Empire State Building. Sonny had a very unorthodox approach to the drums because of the way they lived then, talkin' about effects, and the way he approached they cymbals. Joe strikes the cymbals to demonstrate how Sonny would hit a cymbal. It's the same three cymbals, but a different sound. He also played in an orthodox manner because of playing with Mr. Ellington. Joe demonstrates Sonny's trademark, Mr. Empire State Building, Mr. Sonny Greer. Joe demonstrates that the modern drummer playing rock are playing what Sonny played then! And says you do not tell a child about ABC's because he thinks they were invented just for him, because you must remember there's nothing new under the sun.

11) Billy Gladstone. Joe says Billy is foreign to many because they didn't spend the time to see him. Joe then states that one of the most difficult things to do is play a four stroke roll, then demonstrates it, and asks you to play it with one hand.

12) Manzie Campbell. Manzie can take one stick and roll ten blocks with a field drum! Joe says this was happening while he was still trying to play "Dog Paws", his greatest roll, like a Chinese eggroll. Manzie had a roll that was tissue paper.

13) Chick Webb. Joe knew Chick Webb and was often asked to do a Chick Webb. He recommends a records that's in Harlem Congo. Joe says Chick palys something that nobody has gotten yet.

14) Baby Lovett. Joe says Mr. Baby Lovett is the only beautiful man he eve saw to sit behind a set of drums! And he can play any rhythm you want, he can teach and does something that nobody has captivated. He could do the press roll and run you out of town with it! In order to play like Baby Lovett, you'd have to see him because he played it from side to side; he played it in front and he brought it back. He went down the bottom of his snare drums, he came back, then he went on to the right side and then left side, the he shattered his drums around, he shattered his sticks 'round, his body 'round, without too much moving and his shoulders would be shaking!

Joe then says he must add his own trademarks - playing the tom tom to his left and to his right and crossing his hands over. It's a nineteen hundred and nine symphony beat, and it must be legitimate.

15) The Dancers. Joe says he was influenced by dancers on carnivals, especially Pete The Tapper (Pete Nugent), Mr. Eddie Rector, Mr. Baby Laurence, and above all Mr. Bill "Bojangles" Robinson.

(a) Eddie Rector. It took years for people to find out that eddie used to sprinkle salt on the floor because the old floors were very slipped, and Eddie invented a dance called "The Sand".

(b) Baby Laurence. A vocalist who nobody knew could dance, Baby came up with an idea with intricate steps. He was the great innovator of elevating the creative dance with imagination the way he lived that nobody has ever surpassed.